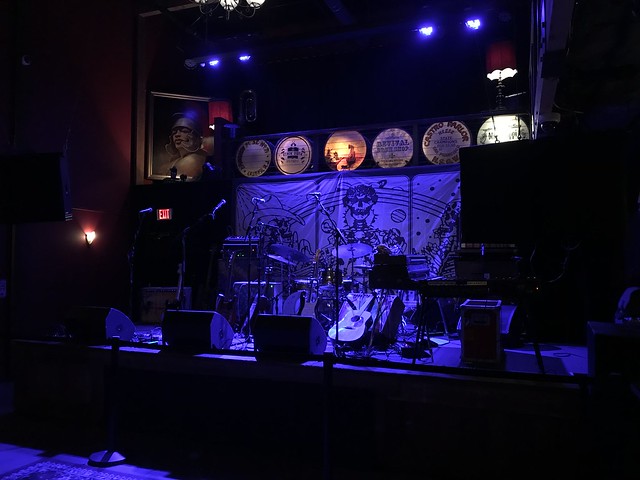 Incomplete setlist information.
…
Loretta (Townes Van Zandt)
…
I feel bad for not having more of a setlist for Mapache. I am not yet familiar enough with their songs but I do know they did also play Broken Down Cadillac, Like A Stone, Songs To A Seagull, another cover of Lonesome LA Cowboy, and Aquellos Ojos Verdes.

Grateful Shred. I just found out about these guys a few months ago through a random YouTube suggestion. With one view I knew right away I had to see them when they came near. Well lo and behold, if you wish for something bad enough you just might get it. In this case my wish came true; Grateful Shred was playing at my (local) venue of choice!

The 2 sets tonight were full of energy. Yeah I know, that’s every concert right? That’s mostly true, but when comparing the same songs one for one with perhaps even the later-day Dead reincarnations, these ones were played with a bit of pep in the step and more bounce and tempo. I’m probably getting scowled at heavily right now but I personally have never heard The Music Never Stopped played live with that amount of vigor, spunk and danceability. And never heard Scarlet Begonias live with that choppy bass line and drums. I’m not saying it was better. I am saying it was fresh and familiar. I’ve never seen any incarnation of The Dead prior to 2007 but I consider myself an aficionado of their music having listened to years upon years upon show upon show of material.

I was so happy to see them do a Drums & Space section too. Yeah, I’m one of those who likes drum solos. I’m a fan of Ratdog’s Stuff and even really enjoy Grateful Dead’s short-lived Seastones segment. I’m a sucker for experimental music. But what threw me on this night, and I’m pretty sure everyone else in the venue, off was the lighted-ball juggler who came out during it. Someone next to me said “Space balls!” to his friend. It was genius. I really think Grateful Shred should call this segment Drums and Space Balls.

Grateful Shred’s song selection for this show can be summed up in one word: Appropriate. For example, with the fires in California, we got Fire on the Mountain and Althea (“this place is getting hot”). For Mississippi Studios we got Mississippi Half-Step Uptown Toodeloo, and during Operator we got a small lyric change referencing Portland. Wonderful!

Grateful Shred blew me away. It was one of those shows I didn’t want to end. I didn’t want to go back to work the next day with the feeling I didn’t have the audio recorded so I could play it again. This is was it. I never thought I’d hear Grateful Dead tunes played in Mississippi Studios, and I definitely never expected to hear a whole 2 sets of it. If you are a fan of Grateful Dead, please do yourself a favor and check these guys out. I took tons of videos of all the songs played so check out those youtube videos!

Fun fact(s):
The bass player, Dan Horne, was one of the musicians in the band Circles Around the Sun which played the interlude tunes at Grateful Dead’s final Fare Thee Well tour shows in 2015.

I also think I saw Neal Casal in the audience but I might be wrong.

My only 2 gripes are: