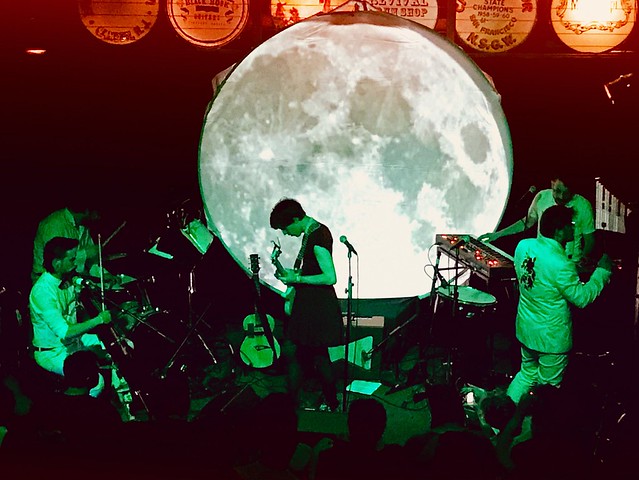 No setlist information.
A familiar name is always cool: William Patrick Owen was in the spotlight as a Featured Artist on this site back in March 2018. William played a show and opened for Shannon Lay in London for one of his shows. Naturally I was excited to see who he opened for on that night so close to home. It was really cool to see how things can come musically-full-circle and how artists connect and interweave with one another on tour.
Shannon definitely had an intimate yet loose stage presence while also being very professional and on-point, her precise fingerpicking and tight vocals her chariot. Shannon seemed very self-aware of the quiet atmosphere in Mississippi Studios and leveraged it to her advantage, adapting as needed. She could’ve been in a coffee shop or a small venue like this and it would’ve been the same delivery. She brought up the woman handling the merch table — [?*] — to sing and play guitar with her for a few songs. That extra layer of sound really rounded out the set.
*Will add her name in once I find out who it was.

Incomplete setlist information.
Cherry Lane
I Wanna Destroy Myself
Marischino-Red Dress $8.99 at Goodwill
Haunted Head
My Zero
The Great Unknown
Driving Down to L.A.
Hounds of Love (Kate Bush)
Come Here Get Away From Me
..
Ordinary life
..
No Place
Love You So Bad
Suck the Blood from My Wound

So excited to see Ezra again I neglected to take succinct notes on this show’s setlist. A song would play and I’d get wrapped up in it and the next would follow without my keeping track of it. Let that be a testament to the energy at this show: Ezra definitely had a different persona at tonight’s show from when I’ve last seen him and watched his live concerts in between. He seemed more comfortable, perhaps even a bit more calm, than previously at Sabertooth PDX. And he interacted with the crowd a bit more and in a different way; perhaps more in a person-to-person manner rather than Bob Dylan or Jack White-and-person manner. This could be due to the fact that he had more time allotted for his set and/or that he is now more comfortable with himself and becoming who he will be for the rest of his life. And I was utterly shocked that Ezra played a cover song; The Visions followed Ezra’s alright here we go set up right into a Katie Bush cover.