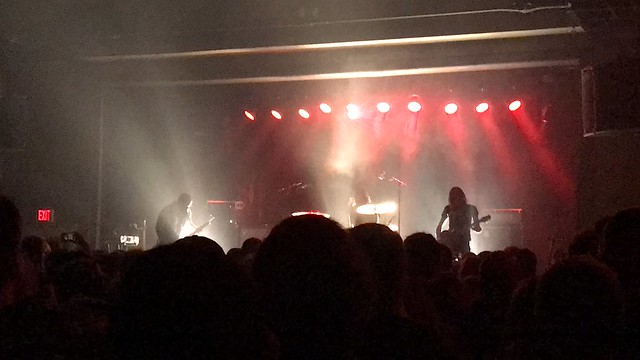 What’s there to say about King Woman that she cannot say herself? Front-woman Kristina Esfandiari is one of the most unique vocalists I’ve ever heard and smooths out the tasty crunch and crash of the band. Stentorian, atmospheric, and full of emotion was King Woman’s set.
Russian Circles‘ drummer appeared to tower over the rest of the band like a lunging scarecrow as wind blew up and through his hair. I kept thinking, “This is it! This was the band on the TV when they took the famous Maxwell Blown-Away Man photo!”
This, obviously not very true at all, made me think about something: Maybe it’s time to take an updated twenty-first century version of this photo with Russian Circles at the force-side.
The vibe of the show was precision, power, and raw energy. Sure that could be said about any show but these guys were doing it different. I couldn’t get over how tight they were and like a fine watch were switching tempos, chords, and sometimes even time signatures. I couldn’t get over how they had the sound of a 6-piece band. I guess I should expect no less from a band out of Chicago — I’m adding Russian Circles to the running list of amazing bands out of the Windy City and you should too.