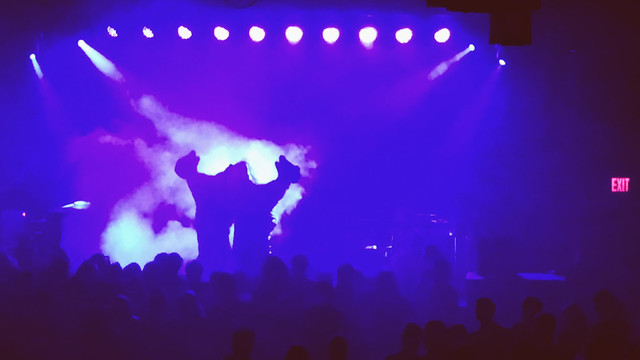 Kingdom of Not was one of the most fun shows I’ve ever seen. It was just a two-piece band with a guitar player and a singer… no.. a singer and mask-wearer. The whole act was unlike anything else I’ve ever sen: the singer kept pulling masks out of this trunk at the foot of the stage and switching them out with each song. It was a quasi-demonic theatrical bloodless satire ceremony with poetry and a narrative that kept you on the edge of your seat. Give Debbie & the Demons a listen for a nice taste of what happened on this night…

Reptaliens followed up the ceremony of masks with their own reptilian ceremony to start the set. No, seriously… They ritualistically welcomed the band onstage in a cloud of fog and light beams.
And the music of Reptaliens is not what you would assume: imagine if Carly Simon joined a band consisting of parts Wampire, Al Kooper’s Super Session, Elvin Bishop, and Marvin Gaye and you’ll kind of start getting close to the sound. The music is full-fledged smooth and rhythmic dance-grooves and at the same time absolutely chill so you can mellow the hell out. Classic Pacific Northwest vibe that works. I was laughing so hard when the giant dinosaurs came out into the crowd dancing. Their heads and tails were whipping about to the beat and made the whole room follow suit.

Foxygen big-band style. What can I say other than they’ve finally done it right. Sam (and vocals) were on point, the band was extremely dynamic with a full sound breathing new life into old and often-neglected songs, and Rado got on his piano and slayed guitar. This was without a doubt the best time I have sen Foxygen. Hopefully this is a sign of things to come in that the band is maturing to the point where each of the two pieces (Sam and vocals; Rado and musical talent) are harnessed and focused. We don’t necessarily needs hits we just need to be taken to that place with you.

Incomplete setlist information.
We Are the 21st Century Ambassadors of Peace & Magic
San Francisco
Shuggie
…
On Lankershim
…
Upon a Hill
Trauma
…
On Blue Mountain
…